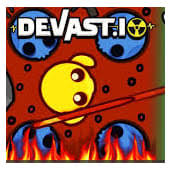 The post-apocalyptic world of Devast.io is home to multiple players. Prepare for survival by constructing a bunker and stockpiling weapons in anticipation of having to fend for yourself in a harsh world.

In Devast.io, you and your fellow players must withstand wave after wave of mutants and other players. Play through a post-apocalyptic world where nature has reclaimed man-made structures and animals. This arcade-style game has beautiful 2D visuals, and it cycles between night and day as you fight merciless enemies, collect loot, and seek refuge in hidden bunkers. To make it through the night, you should look for food and water before nightfall. You can craft various items and build your own stronghold.

This game does not have an online mobile version.

How to play the Devast.io game?

Devast.io is a multiplayer online battle arena where you can team up with people from all over the world. Discover a server, adopt a handle, and make it through. Be wary of the radiation waves; they can kill you instantly. Try to fight your way through when you come in contact with an opponent.

To control your player:

Are you ready to practice your survival skills in a post-apocalyptic world? Hit play to get started!