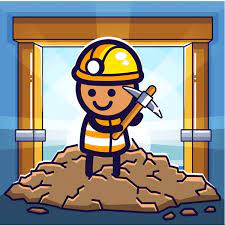 In the Idle Mining Empire, you run your own mining empire in your spare time. It's possible to build a prosperous mining empire from the ground up. Start yourself and automate the systems in the long run.

The game's objective is to create a mining conglomerate from scratch.

You can improve productivity by opening up your mine shaft, training your staff better, and instituting some automation.

You may play Idle Mining Empire on your mobile or web browser.

How to play Idle Mining Empire?

The activities are mining, storing the resources you mined, and earning money. You can use the dollar you earn to unlock a new mine shaft.

At the beginning of the game, you have only Ten(10) dollars which you will use to open your first mine shaft.

Tap on your workers to direct them to park the resources you mined and move them to the warehouse. The resources are converted to money in the warehouse. More valuable mine shafts become accessible as the player progresses through the game.

An Idle Mining Empire without its share of mechanization just wouldn't cut it. You'll be able to assign managers to the various stages of the workflow early on. Each component can be improved to increase speed and productivity.

Are you ready and determined to build and automate a mining empire? Hit play to get started!