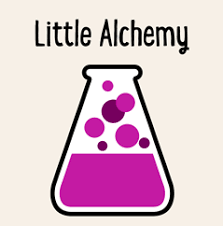 Little Alchemy is an HTML 5 game in which you take the character of a scientist; you're tasked to create new things with different elements. Rainfall, weapons, etc., are the things you will be creating using the correct elements.

The game has four main elements: water, earth, fire, and air; you're given this element to create a new universe.

The game was developed in Poland by a game development studio called Recloak. There is also a sequel to little Alchemy developed by the same company; the sequel is called Little Alchemy 2.

As a science fiction-themed game, it gives you a feel of how to create things. The UI is easy, and the game's rules are not difficult to understand.

It is a single-player game you can enjoy on PC or mobile devices.

How To Play Little Alchemy?

Use your imagination to create fantastic stuff, like combining water and air to make rainfall or earth and air to make dust. Combine the correct elements, and you will create amazing things.

Use your mouse to drag the elements at the corner of your screen to meet the other when using a PC to play, or long-press and drag in the desired direction if you're using a mobile to play.

Do you love making discoveries? Hit the play button to begin!