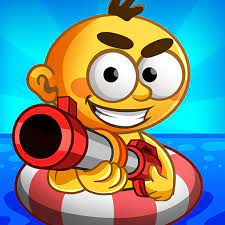 Raft Wars Multiplayer is the multiplayer version of the popular shooting game Raft Wars. Unlike the original game, where you played against the computer, this version lets you play against other players worldwide.

It was created by Martijn Kunst and Tiny Dobbins based in Netherlands, they are also the creator of the original version, Raft Wars and Raft Wars 2.

Originally built as a flash game, Raft Wars Multiplayer is now available free to play on our website.

Raft War Multiplayer is easy to play, just like the other versions.

Use the mouse to aim and shoot the enemies.

Hold the left side of your screen to aim and release it to shoot at your enemies.

You can also use the binoculars on-screen to know your enemies position before you shoot.

You goal is to knock down your opponents and their raft to win the level. You and the other players take turns aiming and shooting at each other's rafts. Please note vital parts of your enemy's raft or strive to knock them into the water.

Note, the game is level based and as you proceed the levels get more difficult.

Are you ready to protect what is yours? Click on the play button to get started!