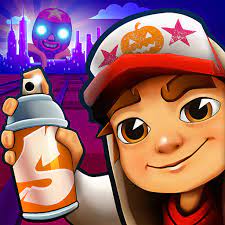 It was launched on the 24th of May, 2014. Subway Surfer is an indefinite runner game that Kiloo and SYBO Games developed for mobile devices. It's a single-player video game where you play as a graffiti artist/surfer attempting to flee from a cruel officer and his dog.

It has now gained a large following worldwide. It is a cross-platform game that works on iOS, Android, iPads, Microsoft Windows, Kindle, macOS, and Linux.

Released initially as application software, Subway Surfer is now available as HTML 5 game that can be played free on our website without having to download.

How To Play Subway Surfer Online?

Subway Surfer requires much sprinting and surfing. It provides its players with many wonderful experiences, prizes, and challenges. During the game, you must avoid obstacles like trams and trains while collecting cash and other special items like mystery boxes, character tokens, speed boosters, keys etc.

Players can choose between the default character Jake or one of the other 28 Subway Surfer characters. Each character has their own outfits and special abilities, which are set at different prices to unlock and play them.

Subway Surfer is now free on our website as an HTML 5 game. Start playing by clicking the play icon.

Your default character Jake is making graffiti on a wall that caught the attention of a police officer and his dog; now you must find a way to avoid being arrested.

Navigate by swiping up, down, left and right to avoid obstacles; you must not stumble or else the officer is right back behind you. The surfing board will give you extra protection; double-tap on your screen to activate it.

How far can you go? Dare to reach the highest Sunday Surfer score ever?